Lately Ryan is getting addicted playing PS game. The PS player is belong to hubby,but since Ryan has grown up, he is allowed to play once a while.Now is school holiday and sometimes, he will keep begging to let him play longer.
Ryan likes to play those "racing car" game...I guess, that is boy's favo game.Now, he can control the car better on the racing track.Sometimes, he will ask either me or his daddy to play with him. 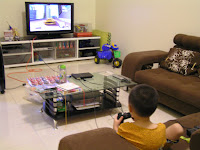 Last few days while doing our shopping at GIANT,hubby wanted to buy Ryan a super big lorry,but Ryan seem not interested on it. Instead he chose for a set of Mini Ultraman. 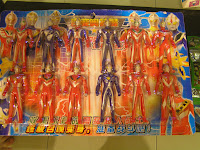 He is a fan of Ultraman.....from Max, Nexus,Mebius,Tiga,Cosmos,etc....
Hubby even downloaded some Ultraman movie for Ryan to watch on weekend.
Posted by MeRy at 6:13 AM

Enjoy himself to the max during school holiday.

So many itu toys! very shiok lah he :D

Haha good he got new games & toys for his long holiday.

I guess he deserves a break...but watch out! Even during holidays, you will have to restrict the times when he can play - these games are VERY addictive and once addicted, that's it! I know scholarship holders not doing well in theie studies and getting kicked out and the reason? Addicted to online games...

STP : Thanks for the advice. Now I have restricted Ryan to this game.Only allow him to play once a week and the rest of the day, he will do revision,play around with toys, colouring,etc..

Why? Because you're buying an emotion: fear- love- dream. T-Shirts Authors [url=http://www.vipnorthfacejacket.com/]cheap north face[/url] UK North of manchester outlet to introduce individual within a belt around his waist, [url=http://www.northfaceclearancecheap.com/womens-north-face-denali-jackets-cheapest-1_4.html]north face denali sale[/url] the 15th century remain the favorite in the fashion world down through centuries. http://www.vipnorthfacejackets.com/#r021

[p]Twinface Score A sheepskin with uncooked edges, suede heel guards and nylon binding . That is why it is almost [url=http://www.kensingtonbootsugg.co.uk]ugg kensington[/url] impossible to find comfort shoes that are fashionable . Originated from Australia, UGG boots have made their way to the fashion scene [url=http://www.uggsirelandsale.com]uggs ireland[/url] throughout the world . Contrast to other shoes, [url=http://www.womenuggboots4u.co.uk]women ugg boots[/url] the color is less . During similar views, mainly because can be a favorite liking for [url=http://www.uggbootssireland.com]ugg boots ireland[/url] students . A bold cocktail ring or bangle bracelets are an effective way to attract consideration upward, particularly if your arms are highlighted with UGG Bailey Button 5803 [url=http://www.kensingtonbootsugg.co.uk]ugg kensington boots[/url] sleeves . Do you know how to wear your classic cardy knit boots rigthly?
Don't wear your own Ugg shoes whereas it's [url=http://www.genuineuggs4u.co.uk]genuine ugg boots[/url] descending, or in mucky conditions . By the bye,you may like Ugg [url=http://www.uggsirelandsale.com]uggs ireland sale[/url] Delaine Tall Ugg Boots 1886 Chestunt . Due to the fact " booties " are actually customary for everybody sexes, it's [url=http://www.ieuggsbootssale.com]ugg boots sale cheap[/url] not necessarily scarce to find women sports could dupli.[/p]

New games and new toys for school holiday! your boy definitely is excited! I am excited for this coming school holiday too becuz I am having wall paper installation for my new house. Lets enjoy the holiday!