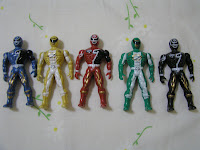 Lastnight after dinner, we all sat at living room watch Doraemon (Ryan's favo cartoon). In between,there was a Petronas Advertisement on Transformer Robots. Ryan was so happy and kept say 'papa,robot robot'. After the show ended, he kept say ' robot robot ' and pull his daddy's hand, wanna go out buy robot. OMG *** Ryan is fancy of new toy again.
No Choice...we went to town area and at last I bought him ' Dark Rider Batman ' for him (cheap cheap one RM6 only for 5 pcs).Ryan was so happy and showed his daddy his new robot.Is it a robot??? ~~ Ryan likes them alot. He even slept with his robot lastnight.
Posted by MeRy at 6:25 PM 13 comments: