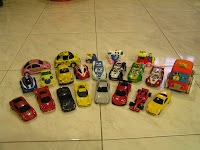 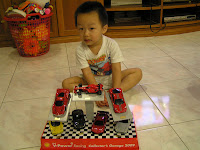 Ryan likes to play cars.....everyday he will play with them, he even asked mummy & daddy to accompany him playing with his cars. Actually some of his cars are brought back from Medan (belong to Ryan's cousins), last Dec when we were back to Medan, his cousin gave him some cars to play and then When we were back to Sibu on Feb'09,I brought all the cars back too for Ryan. Subsequently, mummy & daddy & grandma also bought some new cars for Ryan to play.
What I can say is that 'Everyday is a CAR DAY' for Ryan.Sometimes the cars have to accompany him sleep too. Some new words that Ryan learn while playing with his cars " lorry,car,shell (he is referring to shell ferrari car), e-o-e-o (he is referring to police car), hong-lan (he is referring to the alarm on police car - blue and red colour alarm).
Posted by MeRy at 9:12 AM 12 comments:

Another backdated post....Lately I was pretty tiring after taking care Ryan. Actually I have alot of things in mind to be write up in this blog ,but every night I was too lazy to update my blog.

Let's get back to this topic. Last Thurday 27 May'09 was marked as Duan Wu Jie (Dragon Boat Festival). As usual, MIL started make zongzi a few days before Duan Wu Jie. I did not how to make....I will only contribute my mouth to eat...hahaha:)
MIL make 3 types of zongzi : peanut,bak chang & red bean. 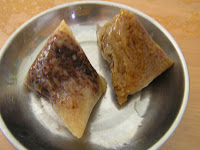 On 27 May'09, MIL cooked alot of food for dinner to celebrate the Duan Wu Jie (almost 10 dihes served on the table). Same time, MIL also invited some guest came to our house for dinner.Ryan also enjoyed eating fried mee with vege+fried chicken that day.Sorry too busy eating...so never snapped any pics.

But since some of the well-known traditions of the festival already existed even before Qu Yuan, other origins of the festival were also suggested. Wen Yiduo suggested that the festival may be associated with dragon closely because two of the most important activities of the festival, dragon boat racing and eating zongzi, are related to dragon. Another view is that the festival is originated from the taboo of evil days. The fifth month of the Chinese lunar calendar is traditionally considered an evil month and the 5th of the month is particularly a bad day, so a lot of taboo had been developed.

Most likely, the festival was gradually derived from all of the suggestions and the story of Qu Yuan is certainly the driving power to make it a great festival today.

Like other Chinese festivals, there is also a legend behind the festival. Qu Yuan served in the court of Emperor Huai during the Warring States (475 - 221 BC). He was a wise and erudite man. His ability and fight against corruption antagonized other court officials. They exerted their evil influence on the Emperor, so the Emperor gradually dismissed Qu Yuan and eventually exiled him. During his exile, Qu Yuan did not give up. He traveled extensively, taught and wrote about his ideas. His works, the Lament (Li Sao), the Nine Chapters (Jiu Zhang), and Wen tian, are masterpieces and invaluable for studying ancient Chinese culture. He saw the gradual decline of his mother country, the Chu State. And when he heard that the Chu State was defeated by the strong Qin State, he was so despaired that he ended his life by flinging himself into the Miluo River.

Legend says after people heard he drowned, they were greatly dismayed. Fishermen raced to the spot in their boats to search for his body. Unable to find his body, people threw zongzi, eggs and other food into the river to feed fish, so hoped to salvage his body. Since then, people started to commemorate Qu Yuan through dragon boat races, eating zongzi and other activities, on the anniversary of his death, the 5th of the fifth month.

Today you may see zongzi in different shapes and with a variety of fillings. The most popular shapes are triangular and pyramidal. The fillings include dates, meat, yolk of egg, etc. The most popular fillings are dates. The festival is closely associated with zongzi and dragon boat races. More importantly this is also a national patriot festival through commemorating the great patriot poet, Qu Yuan. People are reminded that the importance of loyalty and commitment to the community in the festival.

Lastly I wish all my friends ~~ Happy Belated Dragon Boat Festival ~~
Posted by MeRy at 8:52 AM 3 comments: