Last month, Ryan 's school was having colouring competition for all the students (playgroups,pre-K,K1 and K2). I was told by the class teacher to bring our own colouring crayons....After been waiting for a month, at last the result was out from the oven.
Since I don't read Mandarin words, anything in the notice boards(written in Mandarin words only) won't caught my attention. Until the other day, Ryan's classmates mom told me that Ryan 's name was in the winner list on the notice board. ... Yes, Ryan won a prize.

Guess...which one is Ryan's chinese name? Hint : his class name started with "Hua(flower)". 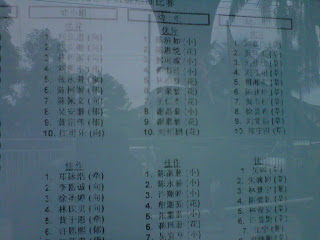