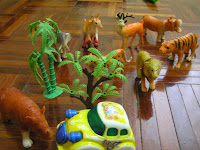 It seem last month Ryan has been getting more than one set of new toy...This animal set is a gift from daddy. He saw it from school and kept mentioning to me that he wanted an animal set at home toy.
After been nagging for about a week....daddy decided to buy it for Ryan and not to mentioned, Ryan was so happy.
After playing for few days, I noticed this animal set has sat inside the plastic bag and today, I took it out for Ryan to play again.

I noticed Ryan easily get bored with his toy,so I played a trick to keep some of his old toys,and a few weeks later, I will take it out for him to play again and he definitely love to play with that toy .Or else, I have to keep buying him a new toy which is not a good solution and also not the right way to pamper him.