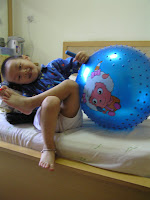 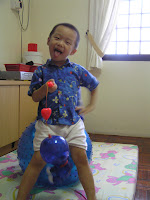 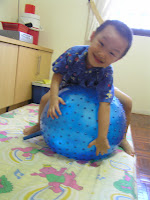 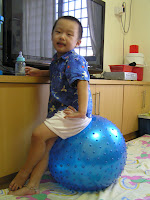 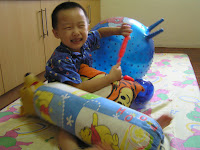 Today, Ryan another new toy from his Ah-Mah, a big blue ball (Should called as "triple B")....]He was so happy...!!
He has been asking me whether Ah-Mah did buy a ball for him as promised while I went to fetch him back from school just now and I said " I don't know" , so I told him to just wait till ]Ah-Mah(my mil) back home ,then he asked himself.
Oh after having his lunch, Just now Ah-Mah came back home with the big blue ball. Ryan was extremely happy when he saw this ball. He started to play around with the ball and I put him on top of the ball because the ball is super big and can support his weight,but Ryan scared..kept telling me..later he felt down.
Even during shower time, he wanted his ball to keep him accompany in the bathroom.
Okie...to let him happy, I allowed him to take in the big ball and we showered the ball too. Having so much fun in the bathroom.
After showering, he played with the big ball in the bedroom while I busy snapping some pictures. He did some cute poses in front of my camera and moving non-stop.So hard to capture nice pictures of Ryan nowadays.He just can't stand or sit still...like cacing(little worm) ....moving around.
It was time to nap and he demanded to sleep with his big ball. I noticed Ryan like to sleep with his new toys and it happened lots of time...sometimes he even hug his new toy sleep soundly.
But for this big ball,he is not able to hug it because it is super BIG for him.