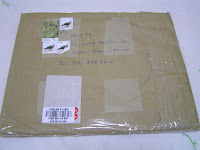 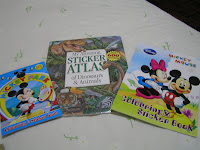 I received a phone call lastweek from Mummy Angel Chuah(Oscar's boy mummy) that she has sent some sticker books for Ryan. So Sweet of her....!!
I got to know her from Mamypoko Forum quite sometimes back. Since I am more active in Facebook lately,sometimes we will just chat at FB.
I received the parcel last Saturday from Mr.postman.

Thank you so much my dear friend Angel....Ryan would like to say "Thanks" to Auntie Angel too !!
Posted by MeRy at 8:32 PM 16 comments:

I have been coughing for the past one week,till now stil coughing. Will see doct if my condition is not getting better for the next 2 days.

As for Ryan, he started get mild fever last Sunday afternoon.No appetite on solid food,but still drink milk n water as usual.
Since his fever was up n down till Monday, so I decided to bring him to Dr.Law for further check-up. Yes....another round of throat infection which caused Ryan to have a fever.
Dr.Law gave antibiotik only as I still have sufficient fever medicine at home.(I always standby medicine at home for emergency used).
On tuesday, his fever is gone,but then still no appetite on solid food. For the past 3 days, Ryan was having porridge for his meal,eat less,but at least he is still eating & drink plenty of water too.
On Tuesday, I noticed that Ryan started to cough & have runny nose as his fever has gone. OMG......I must have spreaded cough bug to him again.Poor boy :)
I faster feed him both flu & cough medicine. Monitored his condition for the past 2 days,not much improvement.
This afternoon (Thursday), I decided to bring him to Dr.Law again for his cough & flu as this morning he coughed badly. He has lot of phelgm & doct advised for nebuliser. Doct also gave Singulair medicine(3packs - cost RM24).
Before we left,doct advised Ryan to come back again tomorrow for another round of nebuliser. Pray hard that Ryan will get well soon.
He has skipped his nursery class for one week....It is better for him to get good rest at home before interacting with many kids on next monday.
Posted by MeRy at 10:33 PM 17 comments: 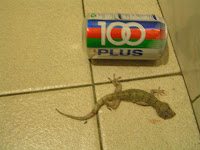 You guys might find this blog picture is disgusting..Yes, I totally agreed,it is disgusting. I never saw such a big lizard in my whole life.
Just now I was intended to dry out my laundries,when I lifted up my head to the ceiling, I saw such a BIG Lizard...faster called my MIL, she also said "aiyo...so big,must kill it". I can say my mil is very good in killing the lizards.Most of the time, she can catch/kill the lizards accurately.
Within few seconds, this lizard lie diedly on the floor.Hubby asked me faster grab the camera & snapped this disgusting picture.
Both of us never saw such a big lizard before ... It is longer than 100 plus can & its body is so fat.
I can't imagine if my room has that big lizard,how am I going to sleep every night. Let me tell you....whenever there is a lizard in my bedroom, I have to make sure the lizard is killed or else I won't sleep in my bedroom. So Who is the "lizard killer"?? Of course, either my hubby or my MIL.
Posted by MeRy at 9:31 PM 21 comments: