I did mentioned in me previous post that Ryan will be joining colouring competition(organized by United People's Activity Association) and today is the "DAY".  The location is quite near to my house ,less than 5 mins drive and we arrived at Star Mega Mall around 9am, it was so crowded. After confirming Ryan's attendance, we were proceeded to the hall and it was packed,almost full house.Lucky we managed to park our table in the middle of the crowd (squeeze like sardin...). I was told there were about 400+ kids joining this competition (not sure it was true or not).
The competition was started at 9.30am and all parents are told to leave the hall before it started. So I just waited outside for awhile, I saw Ryan waved "goodbye" to me. The organizer started to distribute the colouring paper to the kids..alamak, I lupa told Ryan to write his name on the behind of the paper,and I was not allowed to go in. I just prayed hard that the staff in charge will check Ryan's colouring paper. 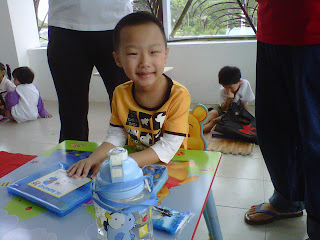 Then hubby went back home and I was alone at the mall waiting for Ryan. I just went for window shopping. Time flies fast...after walking around for  an hour, I went back to the hall and saw alot of kids have finished their colouring,but Ryan was still in the hall doing his colouring. Since I saw some parents walked in to the hall,so I just walked in and see how is Ryan doing. He almost finished up his colouring (left half of the background - blue colour background). This event was sponsored by Mee Daddy (instant noodle made from Sibu) so the kids are colouring the Mee Daddy logo. I saw Ryan add some clouds on the background..not bad, I saw an improvement in his colouring skill. 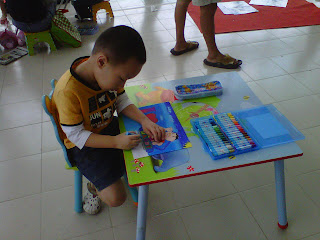 Ryan finished up his colouring just on time(almost 11am) and we have to wait till 11.30am for the result. Hubby has joined us too and we walked around at the toy section while waiting for the winners' announcement.
>>>>>>>>>>........At last, the result was out from the "Oven"..... After announcing the pre-K winners,here we are for the K1 n K2 winners. There are 8 consolations prize followed by 1-4th prize (cash + hamper).
..............................Ryan won the consolation prize (his very first time win the colouring competition). He walked to the stage to receive the prize (too bad, I never expect that he can win,so never standby my camera). Ryan was so happy. 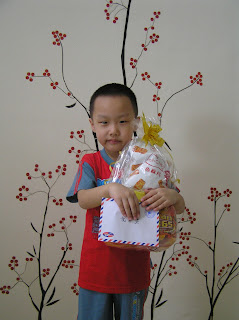 Then we went back home and have Mee Daddy(part of the prize) as our today's lunch. This is our first time eating Mee Daddy...never try this brand of instant noodle before,it tasted GooD.