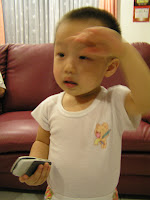 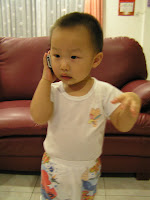 Ryan like to play with any kind of phone(either housephone or handphone). Once he grabbed the phone, he will start talking (***baby talks *** aya....ahh ahhh ahh....ya ya ya ma ma.......).
Tonight when I saw him took his daddy's handphone & started talking, I faster grabbed the camera and snapped this 2 pictures as a memories. From the picture showed above, I was enjoying talking on the phone and watching TV at same time.

Recently Ryan is very stick to DIGI advertisement (have the Quack Quack Duck) & KFC advertisement (some people are dancing promoting about KFC new food- KFC in satay style). His eyes will just stare on the TV...and same time shake shake his body. Too bad I did not managed to snap the pictures while he is acting.
Posted by MeRy at 11:40 PM

So cute. Gwen will hold the phone to her ear but not talking one..haha

Esmeralda - Little Ashton is a good receptionist....can help u answer the phone.hahaha:)

my son put the handphone in the mouth one...:(

My boy also fancy handphones. He like to snatch our handphone and play with the camera.

Ya ya,, the Quack Quack ads is so cute.. hahaha! Not say Ryan, i also like it!